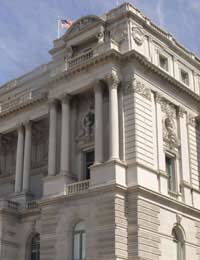 Land records can be a wonderful resource for anyone researching family history. They can give plenty of information about who bought or sold the land, including when it happened, for how much, and often you can discover what they did with it. With America being a relatively young country, you can find records that go back to the first white settlement.

Records in America date back to colonial times, with crown grants and proprietor records. Many of these records survive in one form or another, whether they're patents, surveys, or warrants. The Family History Library has them on microfilm, along with many others. In Florida you can also find headright grants, records of which are available from the National Archives.

If your family can be traced back in America to colonial times, and took the British side in the War of Independence, try looking at loyalist claims. These came about after the U.S. confiscated lands belonging to British loyalists. Once the war had ended, the British government established the American Claims Commission to compensate those who'd lost their land. You can find the claims in the Public Record Office in England .

If your family held land in the eastern states, the Bureau of Land Management can be a gold mine for you. Their database covers the Eastern Public Land States of Illinois, Alabama, Florida, Arkansas, Indiana, Louisiana, Michigan, Mississippi, Missouri, Minnesota, Ohio and Wisconsin, with over two million Federal land title records. These date from 1820-1908, but the bureau is adding more information going back to 1810. The place to begin your search is The Official Federal Land Records Site, but you'll need to pay for copies.

The Library of Congress is also a prime resource for research into land ownership. They have land ownership maps covering 46 states, many dating back to the 1800s (although you can find a few for the Eastern states that go back as far as the 1600s). You can find a list of what's covered at Kinquest and copies of the maps can also be purchased.

On a local level you can do your deed research at the county courthouse, and the best person to see is the Registrar of Deeds. His office will have all the deed books for the area. You'll need to use the "Grantor-Grantee" indexes to locate the sales of land. When you've found the entries you require, you can locate the correct deed books and pages by using the referenced indexes.