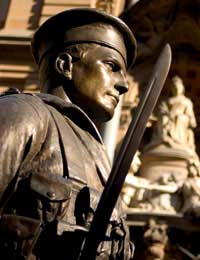 The first instance of a New Zealand conflict came early in the 19th century land wars, where colonists subdued the Maori. Since then New Zealand troops have been involved in many conflagrations, beginning with the Boer War. Family historians are lucky as there is open, easy access to all the records. The only problem is that at present these records are in two different locations. You can find many of those from the Boer War and the First World War at Archives New Zealand, whilst newer files are with the New Zealand Defence Force Personnel Archives. However, the records will soon all be merged at the Archives.

New Zealand needed a militia that could be rapidly mobilised. This became possible under the 1845 Militia Ordinance, with the Volunteer Corps taking over the duties during the 1860s. It was followed by the Colonial Defence Force, which existed until 1867, to be replaced by the Armed Constabulary, a unit that existed until the 1880s. There are rolls and lists for all these groups available in the National Archives.

If your ancestor fought in the 19th century land wars, he might have been eligible for a New Zealand War Medal, although this was only awarded to colonial soldiers who could prove they'd been under fire (the British militia received theirs automatically!). The Archives have medal applications in the Wellington office and each one contains a short description of the soldier's service, which can help flesh out the portrait of an ancestor.

With the Boer War, finding records becomes slightly more confusing. Most are in the Archives. However, if your subject was still in the military after the end of 1920, you'll currently have to look in the NZDF Personnel Archives at Trentham.

Once again, the situation is complex. If you're looking for the records of someone who served in the Great War, you'll want to try the Archives first. But the NZDF still have the records of those who continued to serve in the military after the end of 1920. It can get worse, as some files are in several parts. Those parts dealing with service before 1920 are with the Archives and those after in Trentham with NZDF, meaning you could become quite frustrated.

You can access the Archives online through Archway. Other than the material listed above, you'll be able to find personnel records for soldiers who fought in all the international conflicts. These are quite scanty, giving only the enlistment date, where they fought, as well as any promotions, leaves and the cause and date of death if that applied. But you can find more information by rooting around, such as embarkation and casualty rolls. There are also lists of people who received decorations and awards, as well as lists of conscientious objectors, members of the Maori Battalion and women who enlisted in the nursing service.