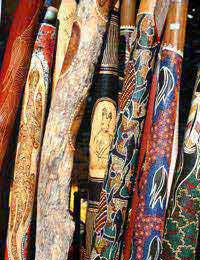 The Aborigines are the indigenous people of Australia, with a history that dates back for millenniums. However you might consider their treatment at the hands of Europeans, the fact is that there aren't too many records kept about them. But the Mabo decision of 1992 brought a sea change, when the High Court ruled that Australia had not been Terra Nullius, or empty land, when the Europeans first arrived in 1788. That meant the Aborigines were finally recognised as the original inhabitants of Australia. Since 1993 archives have been collating what Aboriginal records they have in their possession. From a family history point of view, many are of limited value, but digging might reveal some information.

Much of the assembly of Aboriginal records actually followed the 1997 report Bringing Them Home. This was a government inquiry into the shameful practice of forcibly separating Aboriginal and Torres Strait Islander children from their parents, after which many Australians realised how shabbily their ancestors had treated the indigenous population.

Using the Aboriginal Name Index for Your Family History Research

As of 2006, the Index contained some 70,000 entries, the oldest dating back to 1836, covering both South Australia and the Northern Territory (which was originally a part of South Australia). It includes tribal names and nicknames, as well as a person's age, sex, and where they lived, with a description of what's recorded about them, and the State Records' reference number. If you think its important for your family history project and want to access the Index, you'll need to contact the Aboriginal Access Team

Victoria Aboriginal Records and "My Heart Is Breaking" Book

Victoria has relatively extensive records on Aborigines and the State administration of their affairs, which can be found at the Public Records Office Victoria. The most detailed records cover the period from 1839 to 1859, during which tribal affairs were run by the Chief Protector of Aborigines (and after him, the Guardian of Aborigines).

For the time between 1860 and 1960, you'll find records split between the Public Records Office and the Melbourne office of the National Archives. This can create frustration for a family history researcher, but unfortunately there's no way around it. However, you can find who holds what in the book My Heart is Breaking: A joint guide to records about Aboriginal People in the Public Record Office of Victoria and Australian Archives, Victorian Regional Office.

New South Wales has a number of documents relating to Aborigines in its State Records Office, and many of these are accessible online. However, they don't date back as far as might be desirable.

Most of the records in the National Archives deal with Northern Territory Aborigines, because the Commonwealth administered the Territory from 1901 until it was granted self-government in 1978. The records are in the Archives' offices in Darwin and Canberra.

After 1968, a change in the Australian Constitution gave the power to legislate for Aboriginals to the Commonwealth, rather than keeping it with the states. Because of this, all Australian Aboriginal records after this time are in the National Archives.

The Archives also publish a number of fact sheets and guides, which are easily accessible, including the Bringing Them Home names index.

The Irish Potato Famine and Emigration
Share Your Story, Join the Discussion or Seek Advice..
[Add a Comment]
I am the great grand-daughter of Elizabeth Sarah Hodge nee Tunks.My grandfather is Frederick James Hodge who was Flora Fitzgeralds brother. I have been researching the TUNKS and HODGE family.
Maxine - 9-Sep-14 @ 1:33 PM
so all i have on muriel may is that she was born around 1905 in redfern her father was william e dolan brown. born 1874 - 1943 in pennsylvania her mother was sarah ann waller born 1873 in kyneton in victoria, died in 1962 in waterfall, nsw that is all i have have been told we have Aboriginal history need to confirm if possible
lynmcc - 27-Apr-13 @ 10:43 AM
I wish to confirm if Flora Fitzgerald née hodge and Elizabeth Sarah Hodge née Tunks is of aboriginal ancestry pls previous comment has other information would appreciate ur help pls Kids Tasmania records are impossible pls help
Kids - 30-Dec-12 @ 1:20 PM
I am trying to confirm if Flora Fitzgerald née hodge greens pond Tasmania married to James Henry Fitzgerald Brother Danial hodge married Emma Fitzgerald Elizabeth Sarah hodge née tunks Tasmania married to Albert hodge Records in Tasmania are impossible to access, the few photos I havethe resemblance are obvious in vision Pls help Thanku pls help I have tried for 2yrs now I am so sad I can't get anywhere Regards kids
Kids - 30-Dec-12 @ 1:15 PM
I AM TRYING TO FIND OUT IF ELIZABETH PALMER NEE BROWN IS OF ABORIGINAL ANCESTERY. ALSO LINDA MAY PALMER NEE GRAHAM
ELLY - 10-Oct-12 @ 10:31 AM
Title:
(never shown)
Firstname:
(never shown)
Surname:
(never shown)
Email:
(never shown)
Nickname:
(shown)
Comment:
Validate: