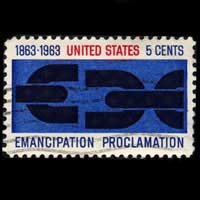 For several centuries, Africans came to the United States as slaves, not free men and women. They were regarded as possessions rather than as people, and treated that way. That fact makes it almost impossible to find records of African-Americans from the period before the Civil War. There were some free blacks, and records do exist for them, but the vast majority of the African-American population lived in slavery.

You'll find nothing useful in the census returns of 1790-1840; all that's listed is the number of slaves in a house, with no names. Even the supplemental slave censuses of 1850 and 1860 are of little use; the slaves are listed only by age and sex, and whether black or mulatto. However, in the regular censuses for those two years, free blacks were listed. Beginning in 1870, the census listed the names of all African-Americans. The records are available through the National Archives although you'll have to pay to see specific entries.

It's really only after the Civil War and the emancipation of the slaves that African-Americans really start appearing in official records. You'll find them not only in census returns, but also, for the first time, in military and land records. But as you seek more information, you should look into the records of three agencies that specifically worked with African-Americans - the Commissioners of Claims, the Freedman's Savings and Trust Company and the Bureau of Refugees, Freedmen, and Abandoned Lands, which was also known as the Freedmen's Bureau - during the Reconstruction era.

These records are also in the National Archives and perhaps offer the best details about many black lives in the period. Not only will you find information on the vital records of births, death and marriages, but also military service, land ownership, occupations, manumission, and a host of other topics. They're not complete, by any means, but they do offer a good path for investigation. The various field office records, in particular, offer the best hope, covering a wide range of subjects, but they're voluminous. Probably the best way to begin is by consulting the Black Family Research page at the National Archives site

It's worth noting that although these records are a treasure trove of information for anyone researching family history in the period around the Civil War, there are no readily usable name indexes, meaning information on specific individuals is hard to find, so you should expect to spend a long time digging.

After 1870, official records of African-Americans and whites were merged, which should make your search much easier. However, as vital records weren't generally kept before about 1900, and blacks were still often viewed as an underclass in some parts of the country, you might find it difficult, if not impossible, to obtain records on births, marriages and deaths. Sadly, there's just no way around this obstacle. Probably the best substitute, and it's decidedly inferior, is to use census returns.