Using the US Registry of War Ration Books 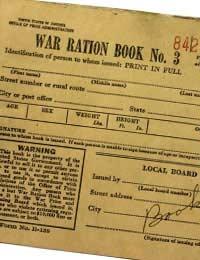 Every little piece of information adds to a family history. When you hit a dead end you can be casting around for other sources that can help you find a way forward. Anything new is welcome.

This is why the Registry of Ration Books from the US can prove very handy for anyone who’s researching those who lived in American during World War II. It’s a database that can be researched by name, and although it’s far from complete, it can offer a very useful avenue for frustrated researchers.

Rationing in the US

In the US, rationing lasted from May 1942 until the close of the war in August 1945, and even then a few items, such as sugar, remained on the ration list. In some regions of the US sugar was rationed until 1947.

Every member of the family received a ration book. Each contained stamps, much as the British ration books from the same period. The books gave details of what foods were rationed and just how much each person was allowed.

Ration books were issued by the Office of Price Administration, known as the OPA, a government agency created for this precise reason, and which would end once rationing was finished. The distribution of ration books to all individuals in the US was a mammoth bureaucratic and logistical task for a government department.

What Was in the Books?

Apart from the allowances for each individual, the ration books contained information on the person. There was the name, address, age, as you’d expect, and even the occupation. These can be useful for establishing where a person was at any given time during the rationing period, as well as how they were making a living.

But there was also a little more. Although not a full physical description, the ration books did list the height and weight of the individual, which helps fill out the picture about them, especially with children, where this would change rapidly as they grew.

There were four series of ration books issued during the course of the war, The first appeared in spring 1942 and lasted until January 1943, when it was superseded by Book Two. Book Three arrived in October 1943, with Book Four at the end of that year and going until war’s end. The last volume had over 100 million copies, reflecting just how vast an undertaking this was, with so many to feed.

It was the first time in its history that the United States had undergone rationing. Rationing was in operation in many countries during this period. In the US every person, including babies and children, received their own ration book and in order to obtain one, had to appear in front of a ration board. At the appearance they received a classification, which determined how much of each item the person was allowed. The amount of rationed items increased as the war progressed.

What We Can Learn From Ration Books

Ration books can’t be a primary source, but they can be a helpful clue when tracing someone in the US during the Second World War. If you can’t locate a person, then the registry might help you find them and pinpoint them, which can then help you find the rest of the family at the same address.

It’s very much a work in progress and will remain so for many years as more names are slowly added. But for now it’s one more weapon to the genealogist’s arsenal.