Using The Electoral Rolls For Genealogy Research In New Zealand 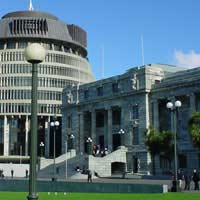 New Zealand held its first parliamentary elections in 1853, and the first New Zealand Parliament met in 1856. At the time, the right to vote was defined according to sex, age, nationality and the possession of property, but not, in theory, by race, although people who weren't British subjects were specifically excluded. So, too, was anyone who had been convicted of treason, felony or other serious offence, unless he'd received a free pardon or completed his sentence. Maori men were theoretically allowed to register and vote, but in reality most of them were excluded because they possessed their lands communally rather than under individual titles like Europeans. Men who owned or leased property in several different electorates were able to enroll and vote in each of them, a practice known as plural voting. In 1881 the franchise was extended to all men, and in 1893 women were given the vote. Note that the 1941 election was held in 1943 because of World War II.

What The New Zealand Electoral Roll Can Tell You

Electoral rolls locate where someone was living, and also, sometimes identify other family members of voting age living at the same residence or within the same community. This can be invaluable in genealogy, telling you not only where they lived at any particular time, but also where they might have moved. If the rolls list family members, then you have additional help in filling out the larger picture of your family history.

How To New Zealand Electoral Rolls For A Genealogy Search

You can find the early electoral rolls for the provinces and early general election rolls (1853-1864) on microfiche at Christchurch City Library; from 1865 onwards they're on microfilm. The rolls are arranged chronologically by province or electoral area. The rolls for 1943, 1960, 1963, 1966 and 1969 are again on microfiche, with hardbound copies of the electoral rolls from 1984 onwards available on the shelves in the Aotearoa New Zealand Centre, so access for anyone building a family tree is quite easy.

Electoral rolls from the 1860s-1920s separate electorates into the North and South Islands. From 1931 electorates appear in strict alphabetical sequence, much easier for genealogy!. After the enfranchisement of women in 1893 you'll find couples and their adult single children all together on the roll. The Chatham Islands were incorporated into New Zealand's electoral system in 1922, and European electors were included in the Lyttelton electorate and Maori electors in Western Maori, which is useful information in genealogy.

The rolls for the years 1869-1875 provide names of persons claiming entitlement to enroll and claimants against whom objections have been lodged. This information was copied from Government gazettes and newspapers.

There's a microfiche index to the 1881 electoral roll, which lists electors in one alphabetical sequence, their residences, occupations and the electorate in which individuals were enrolled. Maori men appear in the index only if they voted in general rather than Maori electorates - again a helpful family tree hint.

At the end of each main roll, you'll also see a supplementary roll, followed by an errata page, showing the names which have been spelt incorrectly. There is a list of numbers. Each person on the roll has a unique number. The list at the end shows who is no longer eligible to vote in the particular electorate.

If your family history search is prior to electoral rolls, one good genealogy tip is to go through through jury lists, which are also microfiched at Christchurch Library. They're arranged geographically, from north to south. They were originally published in newspapers and gazettes. Jury lists include the names of male property owners and leaseholders and are a useful forerunner to electoral rolls, which were not compiled until representative government was introduced in 1856.

In early local body elections the possession of property was important, not gender. In some parts of the country women were voting in city, borough and county elections from the 1860s. The 1898 Municipal Reform Act established non-gendered freehold and residential qualifications.

These local government rolls may be arranged by wards (electoral boundaries) within city. There was a ward system in 1909 and for a short time after, and there has been a ward system since the 1970s. You therefore need to search the alphabetical lists within each ward, rather than searching one list for the whole city, which makes your family history task harder, but will still produce results.

The Irish Potato Famine and Emigration
Share Your Story, Join the Discussion or Seek Advice..
[Add a Comment]
@TJ - In addition to taking on board the information in this article, the Salvation Army has a Family Tracing Service with the aim of finding missing family members and attempting to re-establish contact between them. It operates across New Zealand, Fiji & Tonga Territory and you can find the information here. I hope this helps.
ExploreGenealogy - 17-Nov-14 @ 2:18 PM
My daughter has been looking for her grandmother on her fathers side since just after he past away, 2002. We know her name is Peggy Elaine Thrupp and she lived on the Nth Island in New Zealand. My daughter, Lawana would love to let her know that she is a great grandmother to twin boys, 4 mths and a 2yr old boy. We live in Cairns, Queensland, Australia and have just about exuasted all our options, If you could help i am sure that you would make an old lady very happy and also my daughter to whom i have seen spend hours and hours trying to find her. Regards Tracey Thrupp-O'shea
TJ - 15-Nov-14 @ 7:52 PM
Are the NZ electoral rolls for 1980 to the present available online please>
avoca - 7-Aug-14 @ 5:50 AM
Hi,I've been looking for my real dad since I was 25,my mum has told me his name was murry Muir,he'd had a son Wayne,and a daughter Toby,he'd lived n Hamilton NZ at the time I was conceived,think he would of been born n the 40s not to sure,how do find where they are,his kids would b n there 40s or 50s now,I need to try n find my lost family they don't even know I exist,please help me find them before its to late.thanku.
d - 14-Dec-13 @ 12:17 AM
RE Using NZ Electoral Rolls for Genealogy Research: I can see that the 1911 Electoral Rolls were published/printed in November of that year.Is there a way to find out the date on which the Electoral data was gathered for that Electoral year? Thanks in advance for any help. Pal
Pal - 27-Aug-13 @ 10:30 AM
Title:
(never shown)
Firstname:
(never shown)
Surname:
(never shown)
Email:
(never shown)
Nickname:
(shown)
Comment:
Validate: