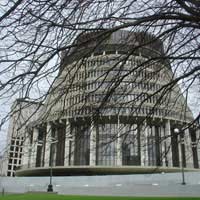 As with births, New Zealand began the registration of European deaths in 1848, the collected records being kept by the Registrar General (as with other vital records, the registration of Maori deaths didn't become law until the 20th century). Given that European settlers didn't arrive in New Zealand until the early part of the 19th century, the vast majority of deaths there have been registered, a boon for anyone researching family history.

If you have both the date of death and the full name (or at least the first name and surname) of the person you're researching, then searching the Registrar General's index should be easy. Unfortunately, the index isn't accessible online (you can request a search, although you'll have to pay for it), but some of the indexes can be found in larger public libraries in New Zealand. The indexes are kept alphabetically, year-by-year. Keep in mind that they go by date of registration of the death, rather than by the actual date of death. So if a person died in December, for example, the death might not have been registered until the following year.

Information on a Death Certificate

Prior to 1875, there wasn't a great deal of information on the death certificate - simply where and when the person died, their first name and surname, sex, age and rank or profession, along with the cause of death, a very brief description of the deceased, where he lived and the name and signature of the registrar. For genealogists this offers some basic knowledge of the person, but it's spare on the detail you really need.

After 1875, things improve for anyone tracing family history, as death certificates became very full. As well as the information above, the certificate now contained the cause of death, the duration of the last illness, the name of the doctor and when he last saw the person, as well as the name of the deceased's father and mother (including her maiden name), when and where the deceased was buried and even the name and religion of the minister or witness. However, some of the most important new facts for a genealogist are how long the deceased had been in New Zealand, where he was born, where he'd married (including to whom and at what age) and the number and sex of the children. You can find plenty there to spur on your research in several different directions.

In 1912 the death certificate was amended yet again, adding the deceased's place of residence, how long had elapsed between the start of the final illness and death, and the widow's age (if she was still alive).

Quite obviously, for genealogists, the information given from 1875 onwards is a gold mine, allowing you to rapidly further your search. The "how long in New Zealand" entry in particular can be especially important for tracing immigrants.

If You Lack the Date of Death

Without at least the year of death, you're going to find your search more difficult, and every avenue is going to take plenty of time and effort, but don't let that stop you. Use the knowledge you have as a starting point. For instance, you can begin searching forwards from the last year you know your subject was alive, although there's no doubt this will be a slow, painstaking (and possibly expensive) procedure.

If you know, or think you know, where your subject died, cemetery records can be a good method of locating a dead ancestor. The problem of course, is that if the person died in a large city, your search could prove to be time-consuming. The International Genealogical Index has quite a number of cemetery records; whilst definitely not complete, it might contain something. Additionally, a number of New Zealand cemetery records are also available online.

These can be a good source for pre-1848 deaths. However, you'll need to know where your ancestor lived before you can begin your search. If you have that information, try the churches in the district.

The Irish Potato Famine and Emigration
Share Your Story, Join the Discussion or Seek Advice..
[Add a Comment]
I was adopted at around 18 months of age.My birth certificate indicates I was born in Otahuhu, but the parents listed on my birth certificate are my adopted parents.I was given to understand that I was adopted from a Catholic orphanage in Auckland. My birthday is December 11, 1945. My adoptive parents have now both passed away, and I am seeking information about my background.Can anyone help? Thank you
Rob - 15-May-15 @ 7:22 PM
Hera patene/Brown/Herepo was my grandmother. We have recently been looking for some of her relatives but we dont know her proper last name. It gets very confusing because my mother (her daughter Sarah Sophie Patene) dosent know her proper lastname. We know she pastaway in the 1980's sometime and we also know where she is buried. We just don't know what her actual lastname is. If you could please help us out , that would be great. And how much would it cost to look into professionally trying to find our extended family?
Francis - 10-Nov-13 @ 9:50 PM
Re Francis John Nunn Two quick searches of the NZ births, deaths marriages register show the death of a Francis John Nunn in 1959 aged 73yrs. NX electoral rolls up until 1981 are now on line and can be searched. Show Francis lived in and around Wanganui ( North Island) and he appears to have been married.
Bob - 27-Oct-13 @ 4:03 AM
Francis John Nunn (Frank) was an uncle of mine, born in 1887 in Hatfield, England. I know that he went to New Zealand after World War I. His family never heard from him again. I am curious about his death and any relatives I might have in New Zealand. We live in Canada and I am not seeking exhaustive genealogical information, but we will be visiting New Zealand next year. How much would it cost to find out a little more information and perhaps get in contact with a relative?
Jumbo - 24-Apr-13 @ 9:19 PM
I am looking for the biological parents of Walter Bob Kelsen ==Born 5 = 8 = 1905 at Wellington New Zealand == I believe his mothers name was Elenor =But I am not aware who his father was .
Ian Kelsen - 29-Dec-12 @ 8:14 PM
If you don't live in New Zealand, the simplest way to track relatives who lived and died there is by employing the services of a professional genealogist. You can do it yourself, but it takes time and you won't always know the right questions to ask or places to look. You'll end up saving plenty of time by using a professional, even if it costs you money.
Gina - 31-May-12 @ 2:02 PM
Title:
(never shown)
Firstname:
(never shown)
Surname:
(never shown)
Email:
(never shown)
Nickname:
(shown)
Comment:
Validate: