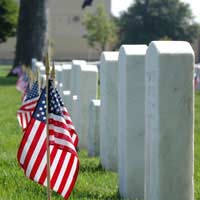 The military tradition in the United States dates from its very foundation, when the Revolutionary Army fought and beat the British. From that point the country's armed forces have regularly been involved in conflicts, both internal, like the Civil War or the Indian Wars of the Great Plains, and international. For genealogists, some of the records can yield plenty of information.

In the colonial era the basic military unit was the local militia, in which most men between 16 and 60 had to serve. These were organised on several levels - town, county and state - and the state militia remained an effective body even after the Revolutionary War, evolving gradually into the National Guard. You'll be able to find militia and National Guard records in the State Archives. Also worth trying are local courthouses and historical societies, who might also have some records.

Where to Find Records

The National Archives is a treasure trove of American records. However, their military holdings are split between two locations:

To all intents and purposes, records prior to 1917 (when America entered the First World War) are kept in the Archives building in Washington, D.C. That includes not only regular Army and Navy personnel (the Navy records there go to 1885 for enlisted men and 1902 for officers), but also those for the Revenue Cutter Service and the organisations it became, prior to being re-named the Coast Guard. Of course 1917 isn't the cut-off point for all records here and you can receive exact information from the Archives' web site. Unfortunately, most of the records at the National Archives aren't available online. However, the Archives has offices around the U.S.

The remainder of the records, covering Army, Navy, Air Force and Marines, are at the National Personnel Records Center, St. Louis, Missouri. To obtain records from them, you'll need to send in a form, which you can download from The National Archives.

There's far more to military records than just a service file. Veterans could apply for pensions and the payments often continued to their widows. The National Archives carries pension records and applications from 1775-1916. These are well worth researching, as they can sometimes bring an unexpected wealth of family history. Not only will the applications offer basic facts about the person, but you can often find plenty of supplementary evidence in the form of documents. These can range from witness affidavits to pages from family Bibles and even an applicant's narrative of his service.

Those who served in the military between 1775 and 1855 were eligible to receive bounty land as a reward for their service. Search these records too, as many contain documents proving age and military service (note however, that for both the Revolutionary War and the War of 1812, many pension and bounty land applications have been combined).

Whilst the National Archives understandably has many records for Union soldiers and sailors from the Civil War, it also has plenty of information on those who served on the Confederate side. However, these are far less complete, since many Confederate records were destroyed before the end of the conflict. If you're researching someone who fought for the Confederates, you should also check the Archives of his state to see if he was granted a Confederate pension after the war (a number of states did this, but all records are local).