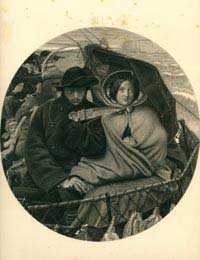 Of those who emigrated to the US, the largest percentage came from Ireland. What many people don’t know is that Ireland was followed in those figures by Norway. The Nordic countries – Norway, Sweden, Denmark and Finland – all had sizeable numbers go to America in the 19th and early 20th centuries.

There has been both a Swedish and Norwegian presence in America since the 1600s, although it was initially small. The emigrations really began properly in 1825.

The Norwegians beat the Swedes in the emigration stakes when the Restoration set sail for New York in 1825. Much like the first English emigrants, they were escaping religious intolerance. The ones leaving were Quakers and also members of a group called the Haugianerne. They travelled west in the New World, mostly settling in Wisconsin and Illinois, both of which were then frontier states.

However, it was another 11 years before the next ship of emigrants joined those pioneers. But the flood gates opened in the late 1830s, after one of the emigrants described the possibilities of America in Norwegian newspapers.

Although most Norwegians settled in the United States, mostly in the upper Midwest, they actually arrived in North America in Canada. The passage was shorter, and reaching their eventual destination was much easier, travelling largely by water rather than overland by rail or in wagons.

The Sloopers, as the Norwegians were known, moved west over the decades, first into Minnesota and Iowa, and by the 1870s there was a sizeable Norwegian presence in the Dakota territory. Later in the century, many took root in the Pacific Northwest, especially in the area around Seattle.

Until the 1830s it was illegal for Swedes to emigrate. Once that law had been changed, however, many did leave. There were two factors behind this mass emigration. Most importantly, the country had become heavily overpopulated, making it hard for anyone to get ahead and own property. The other driving force was the repression practiced by the Swedish church – leaving brought freedom.

Swedish emigration to America began in earnest in the 1840s. Like the Norwegians, they tended towards the upper Midwest, where there was ample land as it was still pioneer country. With a reputation for honesty and hard work, they were welcomed and soon became rooted in communities, most of them agricultural. The peak years for Swedish emigration ran from 1865-1900.

The Swedish government disliked the large emigration numbers, believing it took away some of the labour from Sweden, but once it had begun there was no stopping it. It was fuelled by those who did go back to visit (unlike those from other countries, a number of Swedes did visit their homeland after becoming successes in America). The stories they told, and their relative wealth, became a spur to further emigration.

It continued, both for Norwegians and Swedes, until the First World War, the event that changed everything in the world.

Both Danes and Swedes also emigrated to the US, although the numbers, and the percentages of the population was much lower than for the other Nordic countries. In part this was due to the more settled economic and political conditions, which created less impetus to leave.

In our article Genealogy And U.S. Immigration Records, find out how to track down your European ancestors who landed at Ellis Island and other western American ports.