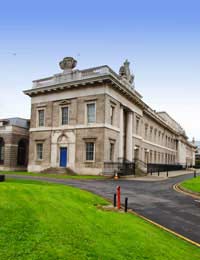 As anyone researching family history soon learns, census records can be like gold. Not only do you locate a person in time, but also in a very physical place, with a street address. Additionally, you learn who else lived in the house and often what each person did as well as their relationship.

Plenty of national censuses have been conducted in Ireland. For any genealogist hoping to find records from the 19th century though, the tale is one of frustration. The first four Irish censuses (1821-1851) were largely destroyed by fire in 1922; all that survive are fragments. As if that wasn't pain enough, the government destroyed the returns from 1861-1891. That means you're completely out of luck for 19th century censuses.

What this means is that the earliest national censuses date from 1901 and 1911. Normally, you'd currently only be able to access the 1901 census (records aren't released for 100 years), but because of the circumstances, the government has released the 1911 returns for the Republic of Ireland and you can find them in the National Archives.

You can find a full copy of the 1901 census on microfilm at the Church of Latter Day Saints Family History Library - they have several branches in Ireland. The 1901 returns for the counties that now make up Northern Ireland are in the Public Record Office of Northern Ireland.

The loss of so many national census records is devastating, but it's not completely the end of the world. There are some other records you can access which can offer some excellent information. Griffith's Valuations for instance, was begun in 1848, at the height of the potato famine. Although not a census as such, it does give a listing of land owners and renters. There's also the early Religious Census of Ireland, which is as close to an early census as you're going to find. It was taken in 1766; under government order, Church of Ireland ministers made a list of the householders in their parish along with their religious affiliations. The 1922 Dublin fire claimed the original set of returns but luckily, many transcripts survive. The Public Record Office of Northern Ireland in Belfast has copies and you can also find transcriptions in the Family History Library.

Although they're not censuses per se, the 1702 list of Irish pensioners of William the Third's Huguenot regiments lists names, as does the list of men employed by the Irish Revenue Service in 1709, although most of these were probably English.

In the absence of national census records for the 19th century, you have to become more creative in your digging for information on your ancestors. This is where county and local records can prove so effective. The Dublin City Census of 1851 was compiled from the now-destroyed national census and lists 60,000 heads of household, for example. A petition for clemency for William Smith O'Brien, from 1848, has 80,000 names on it. Both are available for a fee from Irish Origins.

The Family Research Group has an index linking to many interesting musters and rolls, some dating back to the 17th century, although in many cases you'll need to pay after following the links in order to see the information.

Links to plenty of the smaller county records can be found at Census Finder. Again, you'll have to pay for some of these, but a number of others are free.