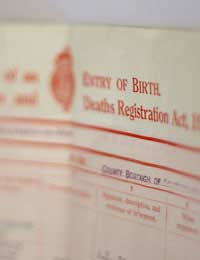 Family histories can be full of hidden clues. The trick is understanding what they mean and unravelling the mystery behind them. That’s not always easy, however, since they can often be quite cryptic.

Some facet of a family will have come down through the generations. It could be something like the family is descended from royalty or aristocracy (quite a common story) through a union outside marriage.

That’s always a good tale, but when it’s investigated by someone putting together the family tree, it’s very rare that it’s true, and it can be virtually impossible to prove. It’s more common for tales to become twisted and distorted over time, so they become like Chinese whispers, and it can hard to distinguish exactly what they mean.

However, they’re all worth hearing, because many do contain a germ of truth, at least in some fashion. Sometimes they give oblique hints as to the origin of a family member, and that can prove useful where other avenues have failed.

In one family there was a legend that an ancestor had taken a Spanish bride. It was something that had circulated for years. When one person in the family came to assemble a family tree, he expected to find that someone had married a Spaniard.

Going back six generations he was initially unable to find anything that matched the story. As he investigated, the most exotic thing he could find was that an ancestor had married a woman named Charlotte. The marriage certificate was perfectly in order, but when he checked further, looking for her birth certificate, he discovered that, although she’d been born in England, her Christian name was Carlotta, and that her parents were Spanish.

Without the family story he might never have checked so extensively, simply taking his information about her from the marriage certificate. The clue in the family history had kept him looking where he might not otherwise have looked.

The problem is always going to be interpreting the clues and making sense of them. But when you’re starting work on a family tree, it’s important to have as much information on the family as possible, including all the obscure rumours and tales. They can help illuminate things and lead you down paths you might miss without the knowledge or hint. Talking to the oldest members of the family and recording their recollections can be invaluable in all this.

They vary greatly, and some will be downright wrong, tiny facts that have been blown into mountains over the years. But they remain part of the family’s colour and joy, the things that separate it from another family.

Other common clues relate to military service. These might not directly relate to a family tree, but discovering that someone in the family’s past did indeed serve in India, for instance, or did win medals for bravery can be a great joy. It all helps fill out the bigger picture of a family, which is part of the intention behind creating a family tree. It puts people in more direct touch with the past.

Some rumours can be checked more easily than others. If someone in the family has supposedly been convicted, then research can establish the truth behind the words. That’s often also true when someone was supposedly in the workhouse, since records are fairly complete.

All of this adds to the fun of family history, and should be taken that way. It makes the researcher more of a detective and increases the pleasure behind genealogy.