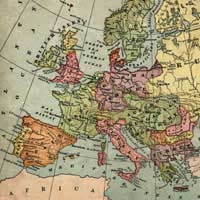 In genealogy terms, most of us are the descendants of immigrants, even if we don't think of ourselves that way. Some just arrived more recently than others. If you could go far enough back, you'd see that in our blood lines we have the Normans, Vikings, Angles, Saxons, and even the Celts. However, that's been so many centuries ago that we think of ourselves as natives.

But what of those where the history is more recent, or even dating back to the time when records were kept, like the Huguenots of the 16th century or the influx of Irish and Jews in the 19th, or people from the Caribbean in the 20th? They too want to trace their ancestors and assemble a family history.

Were Your Ancestors Immigrants?

It's not always easy to discover whether your ancestors were immigreants, and you may only discover the fact when you get started on a family tree. If you're Jewish, for example, or of Afro-Caribbean heritage, then obviously, yes, they were. For others, it's far from obvious. Many Huguenots arrived here to escape Catholic persecution in France and became assimilated, their names becoming anglicised to the point where you might only stumble on the fact by accident. For many the first indication will be on a census, where country of origin will be listed. Only if you're lucky will there be more information that that, such as village or town, to aid in your genealogy search.

Of course, once immigrants arrived here, they'd be treated the same way as everyone else when it came to civil registration, census returns and probate records, meaning they've left genealogy records. The names themselves don't necessarily tell you anything. Under English law, people can call themselves by any name as long as it's not for fraudulent purposes. Whilst many did change their name to sound more English, few did if officially (by deed poll).

Those arriving here faced a choice between being naturalised or denization. The latter was the more popular option; although it means they became a British subject without the full rights of citizenship (they couldn't inherit land of hold public office, for example). But it was free, and many thought the extra rights not worth the expense - although a foreigner could become naturalised by marriage. Before 1844, for most people denization was the only way to become British, as naturalisation required an Act of Parliament. You can find records of denization and naturalisation in the National Archives, with indexes both there and at the Family Records Centre, and worth checking as part of a genealogy search into immigrant ancestors.

Prior to 1903 there was little restriction on immigration. At that point a Royal Commission showed that immigration put a strain on local communities, among other things, leading to the Aliens Act of 1905, and in 1920 the founding of the Immigration Branch of the Home Office.

Jews have been in Britain on and off since 1290, but the majority of immigration came in the 19th century. You can find many papers at the National Archives, but the Jewish Genealogical Society of Great Britain also has a large amount, and the Jewish Refugees Committee possesses more, although access to theirs is restricted - but they can be help to those researching family history. Also worth trying are local records offices, but before you search it is worthwhile knowing the original, rather than Anglicised, name for genealogy.

A lot has been published by the Huguenot Society of Great Britain and Ireland, including registers of various Huguenot communities in both countries. If you have Huguenot ancestors, use them as a genealogy resource

Ships' passenger lists with immigrant information are spotty at best until 1878, although even then only on ships arriving from outside Europe. Prior that that you can find a list of aliens arriving 1810-1811, and certificates of arrival 1836-1852. The records are in the National Archives, but there's no register, making the genealogy search long, and quite possibly fruitless. For Afro-Caribbeans arriving after World War 11, tracing records of arrival is easy - the problem comes as you dig back further. Beginning in 1821 until 1834 when slavery was ended, the government mandated slaver registers, to be filled out every three years, a useful genealogy source. Before 1821 no official records were kept.

Perhaps the best single genealogy source, and certainly a good place to begin a search for immigrant ancestors, is Moving Here. It gives access to many original documents about immigrats, including photos, maps and personal stories. Collated from 30 different collections, it focuses on the Irish, Jewish, Caribbean and south Asian communities over the last 200 years, with a searchable archive of more than 150,000 items - a treasure trove for anyone working on family history.