Home > Middle Ages Records > How Far Did People Move in the Middle Ages? 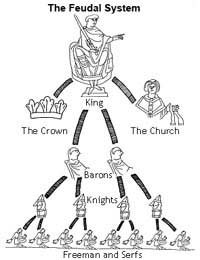 The image we have of the Middle Ages is of serfs tied to the manors, rarely going more than a few miles from home in their entire lives. That’s the picture that’s been handed down to us, but in many ways it’s a false one.

People in the Middle Ages were a great deal more mobile than many think. That’s especially true after the Black Death (1348-50), which forever altered both landscape and society.

Under the feudal system there existed a pyramid in society, with the king at the top. Some, the great lords, held land directly from him, and owed him service. Others held lands from the lords, and repaid them with service, providing warriors when needed. At the manorial level, those living on the manor owed work to their lord. Much of their work was for him farming and performing other chores. At the very bottom of the ladder were those with no land, who were, to all intents and purposes, slaves.

They were tied to the manor, but there was a loophole. If these people ran away from the manor and stayed free for a year and a day, they became free men. Some did; in fact many must have, as there was a constant drift of people from the country to the cities, where enterprising men could make money.

The beginning of the end of the feudal system came with the Black Death, the plague that killed somewhere between one-third and one half of England’s population in a two-year period.

That meant there was a huge labour shortage. Villages were abandoned, and although labourers were theoretically tied to the manors, many went where they were offered the best wages. That marks the beginning of a much more mobile work force.

Many more migrated to the towns, ready to shake off the restrictions of country life. Plenty had died in the cities, too, and there was work to be had, often paying much more than they could have dreamed of before.

The feudal system did continue, although it was entering its death throes. Regardless of laws, there would be fewer controls on the labour force, and work rents became money rents, which gave the poor labourer more freedom.

There were few big cities in the 14th century. The largest were London (by far), Norwich, Bristol and York. It was inevitable that those seeking to become wealthy would gravitate to these places. London, home of the king, held the most allure, and even in those days people would move there from the other end of country, hoping to make their fortunes – remember Dick Whittington, after all.

The population of the cities continued to rise rapidly, a clear indication of the mobility of the population. London, in fact, was one of the largest cities in Europe, even after the plague.

Most of the movement was from the country to the city. But even in the countryside people did travel, although often shorter distances. This, for example, was necessary for marriage, given that many in the same villages or areas would be interrelated; it was necessary to bring in fresh blood.

That inevitably led to movement, usually in the same general area, but at times much further. There were also the itinerants, the chapmen or pedlars, who moved from village to village selling their wares. They were poor men but free men.

As money came to be the bond between master and peasant, the peasant would inevitably go where the best offer lay. That could mean moving to the next village or the next valley. In a world where people subsisted rather than grew rich, any chance of advancement was something to be grabbed. The idea of mobility started to become ingrained after the Black Death, along with the first real concepts of freedom for the average working man.