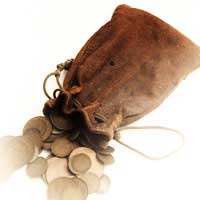 The Poll Tax was actually one form of what was called a lay subsidy - a tax paid by all non-churchmen on movable property to help fund the army in times of war. The earliest lay subsidy - at least under that name - was raised in 1275, and after that they were levied at disturbingly regular intervals until the 17th century. For the most part, however, the returns are of little use to the genealogist, since from 1332 onwards no individual names were recorded, only the totals for a village or town.

The money was raised by taxing individuals a fraction of the assessed value of the movable goods, that fraction varying from year to year (and often place to place). The goods that could be assessed varied between urban and rural areas.

Obviously, the well-to-do paid more, but many others also ended up having to pay, although the poor were exempt - the minimum payment was usually 6d (2 ½ pence). In fact the list of exemptions is fascinating in its own right: not only churchmen, but also workers in the Royal Mint, inhabitants of the Cinque Ports, inhabitants of the Counties Palatine of Cheshire and Durham, and tin workers of the Cornish and Devon stannaries.

From 1524, when the method changed so that land was taxed at an annual value of 24% and goods at 28% in the pound (an eerie augur of modern taxation), names are listed until the lay subsidy was finally ended.

Although the poll tax was strictly a poll tax, and certainly envisaged that way at the time, it's viewed quite differently in retrospect, largely because it was a tax per head, rather than on goods. It was levied just three times, in 1377, 1379 and 1381. Each time the basis was slightly different.

For a genealogist, the wonderful thing about the poll tax is that returns are given by name and place, and the relationship between taxpayers (wife, children, etc.) is often included. Poll tax payments covered almost 60% of the population, which is far more than the lay subsidies that came before it. That makes it, by far, the medieval document most likely to contain the name of one of your ancestors.

The Problems With Poll Tax Returns

The content of the returns vary from place to place no county is complete. As with other lay subsidies, the poor were always exempt, which includes many servants and spinsters. In other words, that missing 40% covers a large social class that was unlikely to be named in other ways.

Where to Find the Records

All the lay subsidies, including the poll tax records, are in the National Archives. However, the poll tax records have also been published in three volumes by Oxford University Press, with counties listed alphabetically. The third volume also appends some extra documents from the Archives.

So, even at their best, the value of documents from the Middle Ages is limited. Part of it is due to circumstance, as the family surname didn't enter until midway through the period, making the clarity of relationships had to discern from a distance. The other part is simply that the lower classes weren't deemed to be worth recording. They were little better than chattel or property (indeed, they were property under the feudal system). That so many records have survived is a remarkable thing. But in an age of vast illiteracy, it's perhaps no surprise that much wasn't written down.

Middle Ages Manorial Records and Your Family History
Share Your Story, Join the Discussion or Seek Advice..
You've highlighted all the problems involved with looking at the Poll Tax from the genealogist's point of view. With the exception of a few families, where the lineage can be clearly traced back, it's not much use, and with those families there are plenty of other sources, so Poll Tax records are superfluous. Sadly, most families won't have a chance of tracing their history as far back as this.
Damien - 30-May-12 @ 2:33 PM
Title:
(never shown)
Firstname:
(never shown)
Surname:
(never shown)
Email:
(never shown)
Nickname:
(shown)
Comment:
Validate: