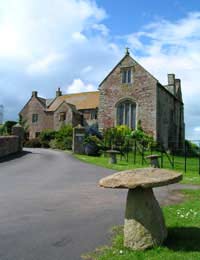 During feudal times, and even beyond, the manor was the basic administrative unit. The lord would be granted the land by a higher magnate in return for services - and that magnate would in turn receive his land from someone higher, all the way up to the king. Some manors were owned by abbeys, which were powerful landowners. It wasn't uncommon for someone to have several manors, in which case he'd appoint a steward to look after his affairs on each manor.

Lord of the Manor, Records and Genealogy

The manor usually centred around a village, whose population would be made up of freemen, serfs and villains, the latter two of which owed service to their lord, spending a good part of their year working his land, in return for which they had a house and their own smallholding, plus the right to graze their cattle on common land, if they owned any animals (freemen owed rent or military service). After the Black Death (1348-49), which decimated the population, renting land rather than giving service became the prevalent method of payment, certainly for the lower classes, but the manor would remain the centre of things for a good century after.

With manorial records, you're often dealing with people who were illiterate, so having anything at all written down is a plus. Add to that the amount of time that's passed and the nature of things becoming lost, and you have huge problems. It's incredibly rare to find manorial records stretching over a long period for any one manor, and it's far more common to find whole areas where none exist at all. According to estimates, only around 4% of all manorial records still exist.

What Can Manor Court Rolls Tell Us?

Manor court rolls detail the passing of land from one tenant to another, the surveys done (legal disputes over land were even more common then than now, and sometimes ended more bloodily), and the appointment of local officials, such as the reeve.

More than most other sources, they can help establish a genealogical line in the Middle Ages (e.g. William, son or Robert….). They also show the patterns of movement, both within the manor and off it, and when these things happened. After the Black Death, for instance, mobility increased incredibly: given the huge reduction in population, labour was at a premium, and workers were more able to go where they were offered money. It might have been illegal, but it happened, and in most instances nothing was done to stop them.

Most large towns began life as manors (Leeds, for example, was the manor of Ledes), and grew gradually. Until the 18th century, the majority would have had populations below 2,000. There are exceptions, of course, in that places like London, York and Bristol were large cities even in medieval times. But in the vast majority of cases, manorial records are going to be your main link - so you need to hope they exist! Failing that, your best bets are the different rolls records, or records from inquisitions. But ultimately, this illustrates the problems associated with going back to the Middle Ages. It's essentially a lottery as to whether information exists or not, and if your ancestors, like most, were lower on the social order, then finding information is hard. Even the manorial rolls might contain only fleeting mentions of them.