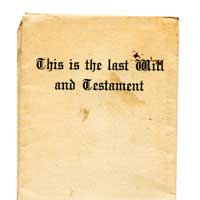 In the Middle Ages, as now, parents made wills to ensure their offspring would be recognised as their legal heirs and inherit their property. In some ways, wills were even more important then, as the social divide between classes was greater. Those of rank owned a lot, and the concept of dowry, no longer in existence, was vital for marrying off daughters, for example. All wills had to go through probate - in order to be verified (formally approved) - by church and other courts. That so many remain is a boon for genealogy

Wills were actually in two parts until 1540, when they merged into one. The will itself was the means by which land was passed on to successors. Since primogeniture was the main means of succession (the land went to the oldest son) to keep the lands intact, that meant the other sons received nothing. What would be lands given in marriage would often be specified, along with dower lands for a widow.

The testament listed the bequests of personal property, known as "personalty." Initially most of this would go within the immediate family, but gradually a tradition emerged or one-third to the widow, one-third to the children, and the remaining third in assorted gifts. Of course, wills pertained to those who had property and goods to leave - for the majority there was no such need, so for most of us, they're not a lot of use in a genealogy search.

Wills and the Crown and Family History

The Crown was always out for whatever it could get, be it land or fines, and so it took a great interest in wills, with civil courts having the final say in any disputed cases - meaning there are records important for family history. But wills (in the more modern meaning) involving only land could be perfectly valid without probate. Nor did those involving only personal goods have to be proved.

Genealogy Sources For Wills From the Middle Ages

Because they were so important legally, and of necessity written down, many wills have survived. That's wonderful for genealogy, because wills show descent, as spouse and children are named, and establish family relationships. Additionally, if one generation leaves a will, the chances are that succeeding generations will, too. Wills from the Middle Ages even sometimes named unborn children as successors.

In London, the Court of Hustings proved wills (and also recorded land transfers). Many wills from the Prerogative Court of Canterbury (PCC) remain, from 1383 onwards, and they can be found in the National Archives when you undertake a genealogy search. The Prerogative Court of Canterbury mainly dealt with the comparatively wealthy individuals mainly living in the south of England and most of Wales (what was originally the ecclesiastical province of Canterbury). The PCC wills consist of registered copy wills, therefore they are copies of the original probates which were written into volumes, by clerks at the church courts. Over the years, styles of handwriting changed, and you will find that many of the earlier wills are written in Latin (if you do extensive work in Middle Ages documents, learning some Latin is helpful for genealogy). Additionally, wills from the following counties are available, with the starting date listed in brackets.

As can easily be seen, a lot of counties aren't covered, although you do find occasional survivals elsewhere, so for genealogy it can be hit-and-miss. In real terms, many counties don't go back that far, only to the early 1500s. But every piece of knowledge, especially the very concrete knowledge gained from wills, builds a much bigger picture, not only of your ancestors, but what they owned and how they lived, all coming together to make your family history richer.