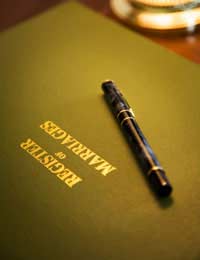 According to the 1851 census, about 25% of the population didn't consider themselves to be Anglicans. Many of those were classed as Nonconformist, an umbrella term taking in Methodists, Quakers and other denominations. That means there's a fair chance that at least one of your ancestors didn't belong to the Church of England. Because of that, they generally didn't appear in Anglican parish registers, which can seem like a dead end in genealogy.

For the Nonconformists, religious life was a solid centre of their world. But in legal terms they stood on the fringes of society until 1828, when they received religious equality, causing genealogy problems. At baptism most denominations recorded parents' names as well as those of the infants, except the Quakers, who recorded birth rather than baptism. Some groups did keep their own registers, however, and in 1837, when registration became mandatory, a number of these were given to the government and can be found at the Public Records Office - over 8,800 had been deposited by 1859. You might well be able to find microfiche records of registers in your local records office (Welsh Protestant registers are in the National Library of Wales), which can be a boon in a genealogy search.

The Presbyterians, Baptists and Congregationalists, known as the Three Denominations, actually began their own register of births in 1742, as part of a long campaign for religious equality. During the first 26 years only 309 births were recorded, but by the time the registry ended in 1837 it has listed some 50,000 births. Officially called the General Register of Protestant Dissenters, it's nicknamed Dr. Williams' Library after the building where it was housed. It's now part of the National Archives, adding to that place as a great family history resource.

Earlier Baptist registers can be found at the Baptist Union, whilst the United Reformed Church holds those of the Congregationalists. For closed Methodist chapels, you'll need to apply to the relevant circuit headquarters - asking at the chapel will give you the address; they're usually helpful to people undertaking genealogy research.

If the status of Nonconformists was marginal, that of Catholics was dubious. Persecuted during the 16th century, they were seen as a threat to the monarchy well into the middle of the 18th; it only ended with the passing of the Roman Catholic Relief Act in 1829. Because of this, Catholics were understandably reluctant to record many things, let alone publish them, even after 1689 when most laws regarding Catholics were no longer enforced and they were free to celebrate mass and perform baptisms. Even after 1837 there was great reluctance among Catholics to surrender their registers, and in the end only 77 were given up, mostly from Yorkshire. However, other registers do survive, and Gandy's books, Catholic Missions and Registers 1700-1880, is an authoritative guide to which ones are in existence and where to locate them, making it invaluable in genealogy if those in your family tree are Catholic.

The Jews had an even harder time of it in Britain than the Catholics - allowed in, expelled, allowed back, sometimes killed. It wasn't really until the 17th century that a solid, lasting Jewish community began to form in Britain, initially Sephardic Jews from the Mediterranean, and later Ashkenazim from Eastern Europe. In most cases, the records of different Jewish communities are held by the relevant congregations, although some can be found at the Mormons' Family History Centres, such as those of the Great Synagogue in London, which is central for a genealogy search.

Fleet Marriages In Your Family History

The term "fleet marriage" doesn't refer to any naval fleet. Instead, they're the marriages that took place around the Fleet Prison in London or at the Mayfair Chapel in Westminster, often conducted by defrocked priests. However (perhaps surprisingly), they were perfectly legal, and estimates are that almost half of the marriages in London in the 1740s and 1750s were Fleet marriages, and for anyone interested in genealogy and family history, they were recorded! It wasn't until Hardwicke's Marriage Act came into effect in 1754 that these chapels were closed. The surviving records were bought by the government in 1821, and were, effectively, legal Anglican registers. But a detailed look will show entries changed, and many false entries, so their value is hard to assess. Yet as the registers hold around 350,000 entries, they're an interesting area to explore if any of your ancestors are from London.