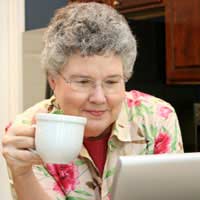 These days it’s quite common for couples to live together. It’s something that’s become quite accepted as a practice, and rarely called by its proper name, common law marriage.

However, it’s really nothing new. Throughout history common law marriage has been the norm among certain strata of society – and that can create a problem for anyone delving into family history.

Big, formal marriages have always been the preserve of the upper class, where establishing a legal succession has been important. Marriage establishes the legal status of the heirs of that union, carrying on both the line and the fortune.

However, then, just as now, marriage was an expensive business (although even the aristocracy of yesteryear might blanch at the amount spent on weddings these days). That put it out of reach of most of the population. Instead, couples were married privately at the door of the church, or even more informally, with church law accepting marriage as a promise between two people, even in the absence of witnesses. More often, people just lived together with the vague promise of marrying at some point, although these marriages weren’t really common law at it, since there was nothing legal about them, and these de facto or contract marriages weren’t recorded – and that creates the problem.

Common law or clandestine marriage officially ended for Catholics at the Council of Trent, which decreed a marriage would only be valid if witnessed by a priest or by others, if no priest was available. For Protestants, common law marriage ended with the 1753 Marriage Act, requiring solemnisation by a vicar (this didn’t apply to Jews or Quakers), eventually including Wales and Ireland, but not Scotland or Britain’s colonies. But mere words can’t really stop something, of course, and couple continued to live together without marriage.

The Problems for Genealogists

Children from a common law marriage would be baptised and recorded in the baptismal register of a parish church (after 1837, this would be on a birth certificate as records became centralised), and that’s where researchers will find them.

However, there would be no record of the marriage itself, no paper trail, since it hadn’t ever happened. In the absence of more records, such as correspondence, establishing when the union began can only be a matter of speculation. Certainly until this century, there was a tendency for people to find a new partner quickly on the death of a “spouse”, so there could have been a number of common law unions in a lifetime, which could easily be unrecorded.

It requires a lot of research, and all too often that won’t yield any results. It’s impossible to know just how common these “marriages” were, since they offered absolutely no legal status, but it’s perfectly possible that among poorer people they were – at least at one time – more the standard than the exception.

So, if you’re trying to trace your family tree and you come across evidence of what appears to be a common law marriage, what can you do? The first thing is to check the marriage records more thoroughly, taking into account misspellings and other possible errors.

From there, look at wills (if any have been left), baptismal registers (of course, after 1837, this becomes much easier with the information on birth certificates, and from 1841, census information), and local newspapers for possible obituaries (unlikely, but you’ll want to pursue every avenue).

The odds are stacked against you, of course. Many people left precious few traces of their lives, and history has inevitably eradicated many of those. So you’ll be left with a lot of extrapolation and guesswork from the available facts, which is how it sometimes happens, unless, of course, your ancestors had more money and power, in which case the marriage trail will be quite clear.