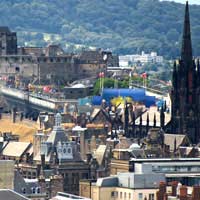 After 1855 it’s easy to find records of Scottish births since, like England and Wales, they were registered. If you're tracing family history you can search online for births more than a hundred years ago at www.scotlandspeople.gov.uk. For births more recent than that, you’ll either need to undertake the search in person at the Scottish General Register Office in Edinburgh, or submit a request for them to search for you (which they will do). It costs a little to consult the records (you pay by the day), but the investment is worthwhile, since they cover a vast range. The indexes are computerised, making your search much easier, and you’ll only pay an additional fee if you require photocopies for your genealogy records.

You can also fill out applications for specific certificates online at The General Records for Scotland.

The standard Scottish birth certificate contains much the same information as its English counterpart, but with one excellent addition – the date the parents were married. This makes it far easier for any researcher to go back, whether it’s in marriage certificates or into the old parish registers.

Before 1855 the parish registers, or old parochial registers as they’re known, are the main source of information about births, although they generally record baptisms, rather than the birth itself. However, if you don’t find the information you’re seeking, it could be for financial reasons. With the Church of Scotland, you had to pay for a baptism, putting it out of reach of poor families (and the records were as prone to clerical error as those in any place or age).

At Scotland's People you can search the old parochial registers online, since the indexes have now been computerised. Although you can, in theory, go back to the 1500s, most registers don’t go back anywhere near that far.

Where you do find information, there’s usually enough to spur your search. In addition to the name of the parents, the maiden name of the mother is generally listed, as well of those witnessing the baptism, and in most instances they will be relatives (in a few places, family relationship is shown). Some registers will record the place of residence and the date of the baptism. In a few instances you’ll also find the occupation of the father. From there you can go back to find the marriage certificate.

If your ancestors weren’t members of the Church of Scotland (Catholic, perhaps, or some other denomination), then you’ll need to consult the National Archives of Scotland (www.nas.gov.uk), which has the church records that exist from these, including all the pre-1855 Catholic parish registers.

Within the Established Church of Scotland (known as the Kirk), illegitimacy was frowned upon, and the Kirk sessions, a sort of court involving the pastor and the elders, had a reputation for being able to discover the father of an illegitimate child – almost certainly from terrifying the mother. Whatever you feel about this, it can help track the paternity of an ancestor within the Kirk.

Many of the records above have also been copied by the Mormons as part of the International Genealogy Index.