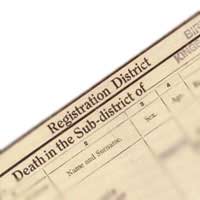 They say only two things in life are certain: death and taxes, and there are records of both. But to a genealogist, death is actually the least important part of the cycle. Once a person's been born and had children, their genealogical use is, to all intents and purposes, over. After all, you can trace your ancestors without knowing when they died, and a lot of family trees don't include the date of death.

But death certificates definitely have their place in genealogy. The age at death can give a very close idea of birth date, and the home address can be used to locate the family on the census.

Death Certificates: What to Look For to Help Trace Family History

As with birth and marriage certificates, deaths have been recorded by the state since 1837. However, if all you need to know is the age of a person at death, for much of the period you don't need to find a copy of the full certificate. Between 1866 and1969, the age at death was listed in the national index (a zero means under the age of one). After that, date of birth is shown instead.

The death certificate shows where and when the deceased died, name and surname, sex, age (or d.o.b.), occupation (or last occupation if retired) and address, and cause of death, along with the signature, description and address of the person giving information about the death, along with when it was registered and the name of the registrar.

One thing to be taken with a pinch of salt is the cause of death. All too often it's a euphemism for something else, and as you go back to Victorian times, diagnoses become notoriously inaccurate. Since 1874 a doctor's certificate has been a necessity for the issuance of a death certificate, and often accompanies it. Indeed, until that date, it wasn't even necessary to put a cause of death on the certificate! That said, between 1858 and 1874, a certificate should state whether the death had been certified or not by a doctor.

You might notice a reference to a certified period of time in the cause of death column. This might refer to the statutory maximum period between death and burial. In the case of an epidemic like cholera, for example, it would be 24 hours. These figures can prove to be of interest.

Records of Stillbirths Could Help Your Family History Research

Stillbirths are a category unto themselves, and create an entry that's both birth and death certificate. The compulsory registration of stillbirths only began in 1927, with the cause of death only added after 1960. Prior to 1874 you didn't need a certificate to bury a stillborn child. A stillbirth has to be registered within three weeks of the event. Before 1983 the baby couldn't be name, and still can't be named in retrospect.

Records of Deaths Abroad: Outside England or Wales

If a British citizen dies abroad, the death should be recorded in the same manner as a birth or marriage - that is by the consul or high Commissioner, as has been the case since 1849. However, if the body is returned home for burial, the registrar in Britain has to issue a "certificate of no liability" (curiously, nothing is necessary if the person is cremated abroad and the ashes brought home). You can find these records at the National Archives.

Genealogy and Pre-1538 Death Records
Share Your Story, Join the Discussion or Seek Advice..
[Add a Comment]
Have relative who died in Tennessee(?) between 1895 and 1900. I can find no record of death, burial or any info. Next info is census listing wife as widow and there I am stuck. What to do??
Sandy - 30-Jun-20 @ 3:51 AM
I would like to view the death certificate for Frank Montgomery
Ferenc - 25-May-19 @ 12:05 PM
I have just received a copy of my Great grandfathers death certificate from 1905. The cause of death section includes, 'cerebral heomorrhage, right side,13 hours.' Signed by a doctor. I am presuming this is a stroke,affecting his right side, however what do the 13 hours mean? I have read that a time mentioned in the cause of death section can mean maximum amount of time that should pass from death until burial, but this is thought to be use in cases of transmittable disease such as cholera for example, which obviously doesn't apply in this case. I would be really grateful if anyone could shed light upon this. Thank you.
Carol - 15-Mar-19 @ 5:21 PM
Hi all, I am writing a short ghost story and it centres around the sighting of a ghost near a village lake in Cambridgeshire. In the story this apparition appears to be dressed in Victorian style clothing, is female and around 30 years old. For arguments sake if this person died around the years of 1837 to 1842 - would it be possible to find the causes of death in the death records for local people in that specific village? From the research I have done it appears it would very difficult to acquire this information. Often it appears the cause of death was not recorded and if it was it is very unreliable. Also as death certificates were not required to have a doctors certification until 1874. Any thoughts around this would be much appreciated.
Chris - 13-Mar-17 @ 4:11 PM
can I get hospital recordsfrom Lurgan Hospital N Ireland my mother died there Nov 18th 1944 ,when I was 6 yrs old ,we were living at Stewarts Hall she was taken to Lurgan Hospital .
CARLO - 24-Dec-12 @ 2:02 AM
The introduction of the death certificate was a revolution as it allowed people to know the cause of death, certified by a doctor. Before that, someone simply died. Codifying it this way helped with public health statistic (especially important in the 19th century) although the by-product, much later, has been the boon to those studying family history.
Mark - 3-Oct-12 @ 11:11 AM
Tracing a ggg parent (who was decapitated) turned out to have been accidentally killed when mounting a moving train John O'Flaherty died 21 Nov 1874 Kings Cross Station London How/where do I find the Coroners Report?
padkin - 30-Jun-12 @ 9:40 PM
Almost always, if it's not a doctor giving information for the death certificate, it will be a relative of some sort, and this can furnish more information for the family history, especially where description and address are involved. That makes death certificates a doubly useful tool for the genealogist. Along with birth certificates and census information it's one of the basic tools for putting together a family tree.
Wynn - 30-May-12 @ 11:40 AM
Title:
(never shown)
Firstname:
(never shown)
Surname:
(never shown)
Email:
(never shown)
Nickname:
(shown)
Comment:
Validate: