Home > Research Considerations > How Do You Know When You've Really Hit a Dead End?

How Do You Know When You've Really Hit a Dead End? 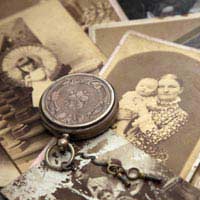 Unless you’re incredibly lucky, or a member of a family that was granted a title centuries ago, sooner or later you’re going to run into a dead end as you research your family tree. It’s not a failure on your part, it’s the simple fact that at some point records end, or there aren’t the clues to point you in the right direction.

But how do you know when you’ve hit that point and not a tricky obstacle that can be overcome?

Records are going to be your greatest indication of a dead end. The further back you go, the sketchier they generally become. Prior to 1837 you have to rely on parish records for baptisms, marriages and deaths. In some cases these will be missing, forcing you to other sources that might not be as reliable – if they even exist.

There are other records to look at, ranging from criminal records to Poor Law records. Bureaucratic records tend to be more complete. The problem is that unless your ancestor was poor or broke the law, there will be no record of him in these. They only apply to a minority. Without records, there’s little you can do beyond trying sources like newspapers, if any exist for the place in that period.

One of the trickiest hurdles occurs when you’re unable to discover where an ancestor was born. You might have information about him in life, but you don’t know where he was born. In genealogy, remember, you can never make assumptions. Everything needs to be backed up by written evidence, whether it’s from original or secondary sources.

Of course, sometimes there are clues in a name. With someone named after a town or village, for example, you can look there. The problem is often that those became fixed as surnames quite early, in the 14th or 15th centuries, so they’re not a great deal of help for later periods.

When you run out of other avenues, one of the best things you can do is follow any hunches you might have. Although this might go against the very methodical, scientific spirit of family history, when you’re left with nothing else, you have to do what you can. Could your ancestor have been a member of a guild, for example? It’s worth remembering that guilds kept extensive records in cities, and many trades had their guilds.

The big problem is that most people didn’t belong to guilds. They had ordinary jobs and led ordinary lives. They weren’t charged with offences. They paid their bills, they got by. Unfortunately for you, those are the people who left the fewest traces.

Going back to the end of the 18th century in family history generally isn’t difficult. Between the first census in 1841 and the start of civil records in 1837, you can trace people back to the late 1700s. Their dates and places of birth will be listed. Go to the parish records, and you should be able to find them and go back at least one generation-as long as the parish records still exist. Pursue whatever other sources might be around, like newspapers.

When you reach that brick wall, talk to others. Read books and articles that might offer suggestions. The more time and effort you’ve put into your search, the more frustrated you’ll be when you can’t go on.

At that point, put your search aside. You never give up completely. Leave it for a month, then come back and look over everything. You’ll have fresh eyes and new ideas. It’s possible that something might leap out at you that you never noticed before.

From the beginning you should understand that sooner or later you’ll reach a dead end. In virtually every case it’s inevitable. Hope it’s later, not sooner, but enjoy the process of discovering your family history.