Home > Research Considerations > How to Deal With Conflicting Dates in Genealogy. 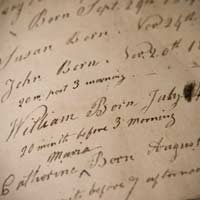 One of the most frustrating things that can happen when you’re researching family history is a conflict in dates, most commonly for births, but also sometimes for marriages and deaths. When presented with two or more possible dates you have to try and work out which one is true, or at least the most likely, as in some cases you’ll never know with absolute certainty.

One great source of confusion came when Britain adopted the Gregorian calendar and abandoned the Julian calendar which had been in existence for centuries. That happened in 1752.

When faced with conflicting dates you need to consider the sources you have. The closer you are to a primary source, the greater the likelihood of the date being correct. A birth certificate, for example, is the ideal primary source for establishing when someone was born. The dates in a family Bible, by contrast, can’t be trusted to the same extent as you have no idea when they were written down.

Similarly, although it’s an official document, a death certificate can’t be seen as a primary source for a birth date, as the official filling it in is simply going on information he receives from relatives of the deceased, which might not be accurate.

Parish registers are far from primary sources when it comes to births. The birth dates that are in them are given orally and so aren’t necessarily precise. Remember, too, that when working with baptismal registers, these record the date of baptism, not of birth.

Whenever possible, take the extra time to search for primary sources, or at least as close as you can get. If you have a handwritten copy of a primary source, remember that there’s still room for error in it, so you should treat it as a secondary source of information and keep trying to find the original.

The greater the time between an event and when it was recorded makes the accuracy more questionable. Memories could be faulty, for instance, there could be confusion, or simply the wrong information has been passed to someone. Ideally the event should have been recorded within days of happening, or at most within weeks.

When records are transcribed, whether in the past on paper, or by hand for inclusion in a database, there’s the possibility of human error. Someone can type the date wrongly, people can be confused between the way dates are written in Europe and America; there are any number of possibilities. As stated, any transcription is a secondary source, and should be treated with a degree of superstition.

When faced with documents showing different dates for an event (and it’s more likely to be a birth than anything else), look at what you have before you. Is one a primary source, or something close to it, such as a transcription? What is the second document, and when did it originate?

How great is the discrepancy? If it’s simply a matter of days, then by discovering other sources you might be able to achieve a consensus on the particular day. Where it’s larger, meaning months or years, then you have to evaluate the sources and see what else you can find.

Where you can find nothing else that can corroborate one date or the other, you need to look for other documents, such as a record of death or marriage, that can help shed light on the problem. These are secondary sources when it comes to birth dates, but they can help to resolve things.

There may be times when it’s impossible to find a definitive answer, or even one that seems likely. The evidence you need might not be extant or might never have existed (this will involve records before 1837, when births, deaths and marriage were centrally recorded). In instances like these you have no choice but to continue searching quietly and record both dates, assigning precedence to the one that seems more likely.
Next Page